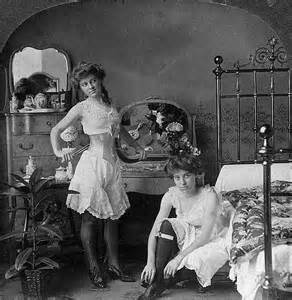 In the early 1800s, the hectic harbor in Mobile, Alabama was bustling with upriver planters who came to town for the annual cotton-marketing season. Along the waterfront a variety of establishments from boarding houses, hotels, saloons and other places know as the gentlemen’s entertaining facilities, as a group they were known as “Shakespeare’s Row”. During the South’s Antebellum Era prostitution ranked right up there with vagrancy and public intoxication. It later became a prohibition of any disorderly behavior public or privately. The fines for “keeping a disorderly house” ranged from $10 to $25; there were no consistent laws on the subject.

It was during mid-1850, when my Great-great Aunt Molly and Modena found themselves visiting a distant cousin in Mobile near the waterfront. They had inherited a hotel in downtown Birmingham and after working night and day for months decided to give themselves a vacation. Leaving the Hotel in the capable hands of their hired staff the ladies went on their retreat.

It was toward the end of their stay when they ventured onto the waterfront and Shakespeare’s Row. Neither Molly nor Modena wavered from having a good time. When they inherited their Aunt Ira’s Hotel the family encouraged them to turn their lives around and make a living running the upper-class establishment in Birmingham.

It was during that trip to Mobil that gave them the idea of returning to Birmingham and turning the their Hotel into a “Gentleman’s Club”. They did not identify themselves with the Shakespeare Row prostitutes, but they did know that since their youth their need to pander with men was well known. That is how the Gentleman’s Club came into existence.

These two young women advertised the club as a place catering to the wealthy.  In the beginning cards, cigars and liquor became the enticement. Upon paying a substantial monthly fee to join, and a separate “visiting” fee deposited at the door would give a gentleman their choice of available “Ladies of Pleasure” or “Ladies of Easy Virtue” for one hour. The city agreed to turn their heads to these nightly “Whore Parties” for a reasonable tax! A wink and a nod condoned and protected prostitution at the Hotel for almost 50 years.

Therefore, Miss Molly and Miss Modena brought the red-light district to Birmingham, Alabama. It was one of the few buildings left standing when Yankee troops pilfered their way through the south. The women that worked in the hotel were not cheap, but to test the virtuous caverns of the sisters’ girls could be costly.

5 thoughts on “A Discovery”

This website annjohnsonmurphreeauthor.wordpress.com and its content is the copyright of Ann Johnson-Murphree - ©Ann Johnson-Murphree -2012/2013/2014. All rights reserved. Any redistribution or reproduction of part or all of the contents in any form is prohibited without permission from the author. You may not, except with our express written permission, distribute or commercially exploit the content. Nor may you transmit it or store it in any other website or other form of electronic retrieval system. All written and spoken poetry, prose, writing, poetic-prose, book covers (front and back), images on this website are the property and the copyright © of Ann Johnson-Murphree.